The space-based observatory LISA will detect gravitational waves from massive black holes (giant black holes residing in the centres of galaxies). One particularly interesting signal will come from the inspiral of a regular stellar-mass black hole into a massive black hole. These are called extreme mass-ratio inspirals (or EMRIs, pronounced emries, to their friends) [bonus note]. We have never observed such a system. This means that there’s a lot we have to learn about them. In this work, we systematically investigated the prospects for observing EMRIs. We found that even though there’s a wide range in predictions for what EMRIs we will detect, they should be a safe bet for the LISA mission.

My previous post discussed some of the interesting features of EMRIs. Because of the extreme difference in masses of the two black holes, it takes a long time for them to complete their inspiral. We can measure tens of thousands of orbits, which allows us to make wonderfully precise measurements of the source properties (if we can accurately pick out the signal from the data). Here, we’ll examine exactly what we could learn with LISA from EMRIs [bonus note].

First we build a model to investigate how many EMRIs there could be.  There is a lot of astrophysics which we are currently uncertain about, which leads to a large spread in estimates for the number of EMRIs. Second, we look at how precisely we could measure properties from the EMRI signals. The astrophysical uncertainties are less important here—we could get a revolutionary insight into the lives of massive black holes.

The number of EMRIs

To build a model of how many EMRIs there are, we need a few different inputs:

We examine each of these in turn, building a more detailed model than has previously been constructed for EMRIs.

That’s a nice galaxy you have there. It would be a shame if it were to collide with something… Hubble image of The Mice. Credit: ACS Science & Engineering Team.

Given a cusp about a massive black hole, we then need to know how often an EMRI forms. Simulations give us a starting point. However, these only consider a snap-shot, and we need to consider how things evolve with time. As stellar-mass black holes inspiral, the massive black hole will grow in mass and the surrounding cluster will become depleted. Both these effects are amplified because for each inspiral, there’ll be many more stars or stellar-mass black holes which will just plunge directly into the massive black hole. We therefore need to limit the number of EMRIs so that we don’t have an unrealistically high rate. We do this by adding in a couple of feedback factors, one to cap the rate so that we don’t deplete the cusp quicker than new objects will be added to it, and one to limit the maximum amount of mass the massive black hole can grow from inspirals and plunges. This gives us an idea for the total number of inspirals.

Finally, we calculate the orbits that EMRIs will be on.  We again base this upon simulations, and factor in how the spin of the massive black hole effects the distribution of orbital inclinations.

Putting all the pieces together, we can calculate the population of EMRIs. We now need to work out how many LISA would be able to detect. This means we need models for the gravitational-wave signal. Since we are simulating a large number, we use a computationally inexpensive analytic model. We know that this isn’t too accurate, but we consider two different options for setting the end of the inspiral (where the smaller black hole finally plunges) which should bound the true range of results.

Number of EMRIs for different size massive black holes in different astrophysical models. M1 is our best estimate, the others explore variations on this. M11 and M12 are designed to be cover the extremes, being the most pessimistic and optimistic combinations. The solid and dashed lines are for two different signal models (AKK and AKS), which are designed to give an indication of potential variation. They agree where the massive black hole is not spinning (M10 and M11). The range of masses is similar for all models, as it is set by the sensitivity of LISA. We can detect higher mass systems assuming the AKK signal model as it includes extra inspiral close to highly spinning black holes: for the heaviest black holes, this is the only part of the signal at high enough frequency to be detectable. Figure 8 of Babak et al. (2017).

Allowing for all the different uncertainties, we find that there should be somewhere between 1 and 4200 EMRIs detected per year. (The model we used when studying transient resonances predicted about 250 per year, albeit with a slightly different detector configuration, which is fairly typical of all the models we consider here). This range is encouraging. The lower end means that EMRIs are a pretty safe bet, we’d be unlucky not to get at least one over the course of a multi-year mission (LISA should have at least four years observing). The upper end means there could be lots—we might actually need to worry about them forming a background source of noise if we can’t individually distinguish them!

Having shown that EMRIs are a good LISA source, we now need to consider what we could learn by measuring them?

We estimate the precision we will be able to measure parameters using the Fisher information matrix. The Fisher matrix measures how sensitive our observations are to changes in the parameters (the more sensitive we are, the better we should be able to measure that parameter). It should be a lower bound on actual measurement precision, and well approximate the uncertainty in the high signal-to-noise (loud signal) limit. The combination of our use of the Fisher matrix and our approximate signal models means our results will not be perfect estimates of real performance, but they should give an indication of the typical size of measurement uncertainties.

Given that we measure a huge number of cycles from the EMRI signal, we can make really precise measurements of the the mass and spin of the massive black hole, as these parameters control the orbital frequencies. Below are plots for the typical measurement precision from our Fisher matrix analysis. The orbital eccentricity is measured to similar accuracy, as it influences the range of orbital frequencies too. We also get pretty good measurements of the the mass of the smaller black hole, as this sets how quickly the inspiral proceeds (how quickly the orbital frequencies change). EMRIs will allow us to do precision astronomy!

. Results are shown for the different astrophysical models, and for the different signal models.  The astrophysical model has little impact on the uncertainties. M4 shows a slight difference as it assumes heavier stellar-mass black holes. The results with the two signal models agree when the massive black hole is not spinning (M10 and M11). Otherwise, measurements are more precise with the AKK signal model, as this includes extra signal from the end of the inspiral. Part of Figure 11 of Babak et al. (2017). 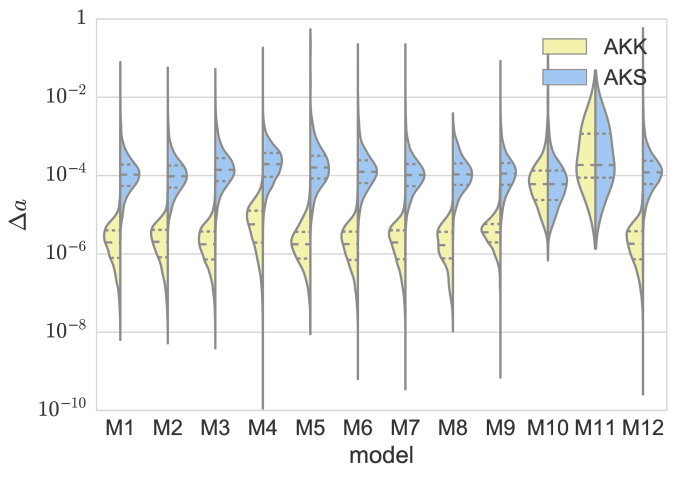 Now, before you get too excited that we’re going to learn everything about massive black holes, there is one confession I should make. In the plot above I show the measurement accuracy for the redshifted mass of the massive black hole. The cosmological expansion of the Universe causes gravitational waves to become stretched to lower frequencies in the same way light is (this makes visible light more red, hence the name). The measured frequency is

is the frequency emitted, and

for a nearby source, and is larger for further away sources). Lower frequency gravitational waves correspond to higher mass systems, so it is often convenient to work with the redshifted mass, the mass corresponding to the signal you measure if you ignore redshifting. The redshifted mass of the massive black hole is 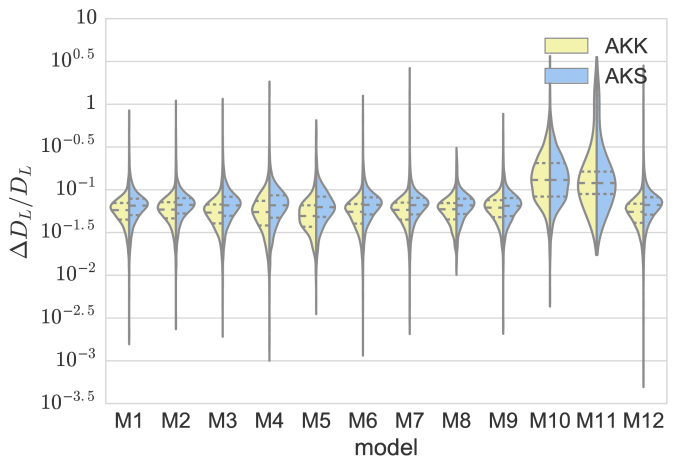 . The signal model is not as important here, as the uncertainty only depends on how loud the signal is. Part of Figure 12 of Babak et al. (2017).

The plot above shows the fractional uncertainty on the distance. We don’t measure this too well, as it is determined from the amplitude of the signal, rather than its frequency components. The situation is much as for LIGO. The larger uncertainties on the distance will dominate the overall uncertainty on the black hole masses. We won’t be getting all these to fractions of a percent. However, that doesn’t mean we can’t still figure out what the distribution of masses looks like!

One of the really exciting things we can do with EMRIs is check that the signal matches our expectations for a black hole in general relativity. Since we get such an excellent map of the spacetime of the massive black hole, it is easy to check for deviations. In general relativity, everything about the black hole is fixed by its mass and spin (often referred to as the no-hair theorem). Using the measured EMRI signal, we can check if this is the case. One convenient way of doing this is to describe the spacetime of the massive object in terms of a multipole expansion. The first (most important) terms gives the mass, and the next term the spin. The third term (the quadrupole) is set by the first two, so if we can measure it, we can check if it is consistent with the expected relation. We estimated how precisely we could measure a deviation in the quadrupole. Fortunately, for this consistency test, all factors from redshifting cancel out, so we can get really detailed results, as shown below. Using EMRIs, we’ll be able to check for really small differences from general relativity! 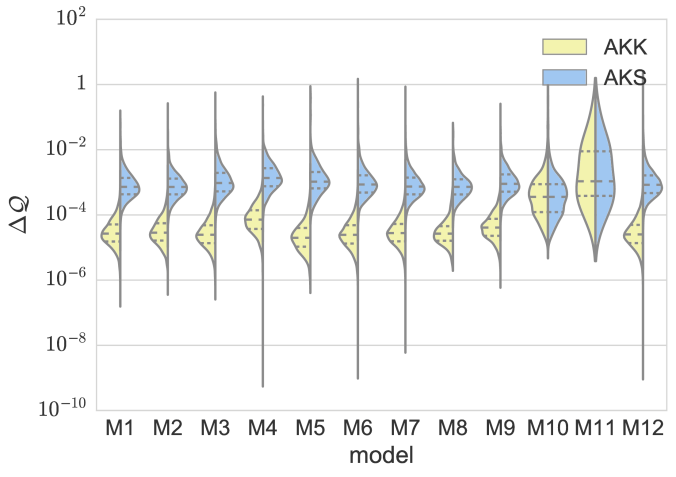 In summary: EMRIS are awesome. We’re not sure how many we’ll detect with LISA, but we’re confident there will be some, perhaps a couple of hundred per year. From the signals we’ll get new insights into the masses and spins of black holes. This should tell us something about how they, and their surrounding galaxies, evolved. We’ll also be able to do some stringent tests of whether the massive objects are black holes as described by general relativity. It’s all pretty exciting, for when LISA launches, which is currently planned about 2034…

One of the most valuable traits a student or soldier can have: patience. Credit: Sony/Marvel

I think hyphenation is a bit of an art, and there’s no definitive answer here, just like there isn’t for superhero names, where you can have Iron Man, Spider-Man or Iceman.

This paper is part of a series looking at what LISA could tells us about different gravitational wave sources. So far, this series covers

You’ll notice there’s a change in the name of the mission from eLISA to LISA part-way through, as things have evolved. (Or devolved?) I think the main take-away so far is that the cosmology group is the most enthusiastic.