General relativity, our best theory of gravitation, turns 100 this week! 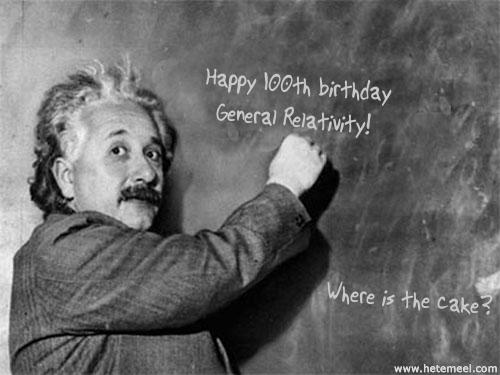 Gravity is the force which pulls us down towards the ground and keeps the Earth in orbit around the Sun. It is the most important force in astrophysics, causing gas clouds to collapse down to become stars; binding gas, stars and dark matter to become galaxies, and governing the overall evolution of the Universe.

Our understanding of gravity dates back to Isaac Newton. Newton realised that the same force that makes apples fall from trees also controls the motion of the planets. Realising that we could use physics to explain the everyday and the entire cosmos was a big leap! Newton’s theory was hugely successful, but he was never quite satisfied with it. In his theory gravity acted between distant objects (the Earth and an apple or the Earth and the Sun) instantaneously, without any explanation of what was linking them. The solution to this would come over 200 years later from Albert Einstein.

Einstein’s first big idea didn’t come from thinking about gravity, but thinking about electromagnetism. Electromagnetism is the force that is responsible for fridge magnets sticking, atoms binding to form molecules and the inner workings of whatever device you are currently reading this on. According to the rules of electromagnetism, ripples in electromagnetic fields (better known as light) always travel at a particular speed. This tweaked Einstein’s curiosity, as the rules didn’t say what this speed was relative to: you should measure the same speed if standing still, travelling at 100 miles per hour in a train or at a million miles per hour in a spacecraft. Speed is the distance travelled divided by the time taken, so Einstein realised that if the speed is always the same, then distances and times must appear different depending upon how you are moving! Moving clocks tick slower; at everyday speeds this effect is tiny, but we have confirmed that this is indeed the case. These ideas about space and time became known as Einstein’s theory of special relativity. Special relativity has a couple of important consequences, one is the infamous equation, the other is that the speed of light becomes a universal speed limit.

Special relativity says that no information can travel faster than the speed of light; this is a problem for Newton’s theory of gravitation, where the effects of gravity are transmitted instantaneously. Einstein knew that he would have to extend his theory to include gravity and freely falling objects, and he spend almost 11 years pondering on the problem. The result was general relativity.

In special relativity, space and time become linked, merging into one another depending upon how you are moving relative to what you are measuring. General relativity takes this further and has space–time distorted by the energy and matter. This idea can be a little tricky to explain.

In Newtonian mechanics, things (apples, light, billiard balls, etc.) like to travel in straight lines. They keep going at a constant speed in the same direction unless there is a force acting on them. Gravity is a force which pulls things away from their straight line, pulling the Earth into its circular orbit around the Sun, and accelerating an apple towards the ground. In general relativity, we take a different view. Things still travel in a straight line, but the effect of gravity is to bend space–time! A straight line in a curved space is a curve. If we don’t know about the curvature, it looks like the object is pulled off its straight line and there must be a force doing this, which we call gravity. Alternatively, we can say that gravity curves the space–time, and that the object follows its straight line in this. In general relativity, space–time tells matter how to move; matter tells space–time how to curve. 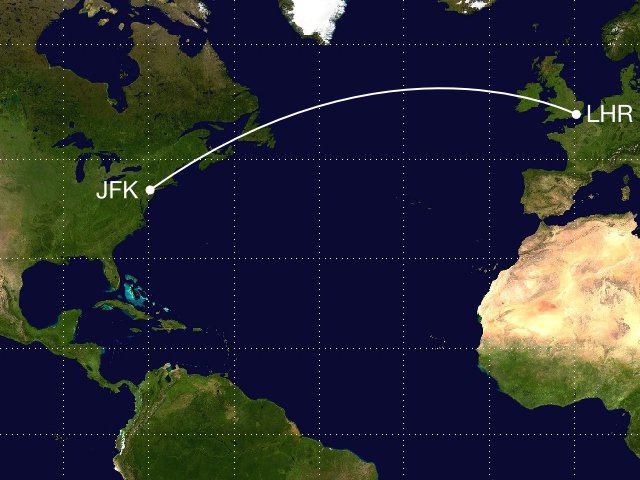 The shortest way to travel from London Heathrow airport to JFK International airport. On a long-distance flight, you may have noticed that it appears that you are moving along a curved line, but that is because the shortest distance across the Earth’s curved surface is a curve. We call this a geodesic, and the same idea applies to curved space–time in general relativity. Credit: Mr Reid.

General relativity solves Newton’s original worries. Objects are connected by space–time. This is not the rigid background of Newtonian physics, but a dynamic object, that is shaped by its contents. Space–time is curved by mass, and when the mass moves or reshapes itself, it takes time for the curvature everywhere else to readjust. When you drop a pebble into a pond, you disturb the surface, but it takes a while for the water further away to know about the splash; there’s a ripple that travels outwards, carrying the information about the disturbance. A similar thing happens for changes in gravity, there are ripples in space–time. Ripples in electromagnetic fields are electromagnetic waves, and these ripples in the gravitational fields are gravitational waves: both travel at the speed of light, in agreement with special relativity.

General relativity is not only a beautiful theory, it has so far passed every experimental test. Right from the start Einstein looked for checks of his theory. One of the calculations he did while formulating his theory was how the orbit of Mercury would change. Mercury is the planet closest to the Sun and so experiences the strongest gravity. Its orbit isn’t a perfect circle, but an ellipse so that Mercury is sometimes a little closer to the Sun, and is sometimes a little further. In Newtonian gravity, each orbit should trace out exactly the same path, but in general relativity there is some extra rotation. Each orbit is slightly shifted with respect to the last, so if you traced out many orbits, you’d end up with a Spirograph-like pattern. This is known as precession of the orbit, and is a consequence of there being slightly greater curvature closer to the Sun. This evolution of Mercury’s orbit had already been measured. Some thought it indicated there was a new planet inside Mercury’s orbit (which was called Vulcan but isn’t Spock’s home) that was giving it a little pull. However, Einstein calculated the general relativity predicted exactly the right amount of extra rotation!

The next test came in 1919. General relativity predicts that the path of light is bent by massive objects. This is gravitational lensing. At the time, the only object that could cause measurable bending was the Sun. If we could measure a change in the position of background stars when the Sun was in front of them, we could check if the amount of bending was as expected. There’s an obvious problem here: the Sun’s so bright that you can’t see stars around it. Arthur Eddington had the idea of making the measurement during an eclipse. He mounted an expedition and confirmed the prediction. This was big news and made Einstein a superstar.

Now, 100 years after Einstein proposed his theory, we are poised to make the most precise tests. There is currently a global effort to directly detect gravitational waves. Measuring the gravitational waves will tell us if ripples in space–time behave as Einstein predicted. The waves will also tell us about the systems that created them, this will give us an up-close glimpse of black holes. Black holes are the regions of strongest gravity; they are where the curvature of space–time becomes so immense that all straight lines lead inwards. Checking that the black holes of Nature match what we expect from general relativity, will test the theory in the most extreme conditions possible.

The Advanced LIGO detectors are currently listening for gravitational-wave signals from merging neutron stars or black holes, and next year Advanced Virgo plans join the hunt too. We don’t (yet) know how often such signals occur, so we can’t say when the first detection will be made. Perhaps this will be soon and we will learn something more about gravitation…

Merging black holes create ripples in space time. These can be detected with a laser interferometer. Credit: Gravitational Wave Group.

The LIGO Scientific Collaboration is busy analysing the data we’re currently taking with Advanced LIGO at the moment. However, the Collaboration is still publishing results from initial LIGO too. The most recent paper is a search for continuous waves—signals that are an almost constant hum throughout the observations. (I expect they’d be quite annoying for the detectors). Searching for continuous waves takes a lot of computing power (you can help by signing up for Einstein@Home), and is not particularly urgent since the sources don’t do much, hence it can take a while for results to appear.

Massive stars end their lives with an explosion, a supernova. Their core collapses down and their outer layers are blasted off. The aftermath of the explosion can be beautiful, with the thrown-off debris forming a bubble expanding out into the interstellar medium (the diffuse gas, plasma and dust between stars). This structure is known as a supernova remnant. 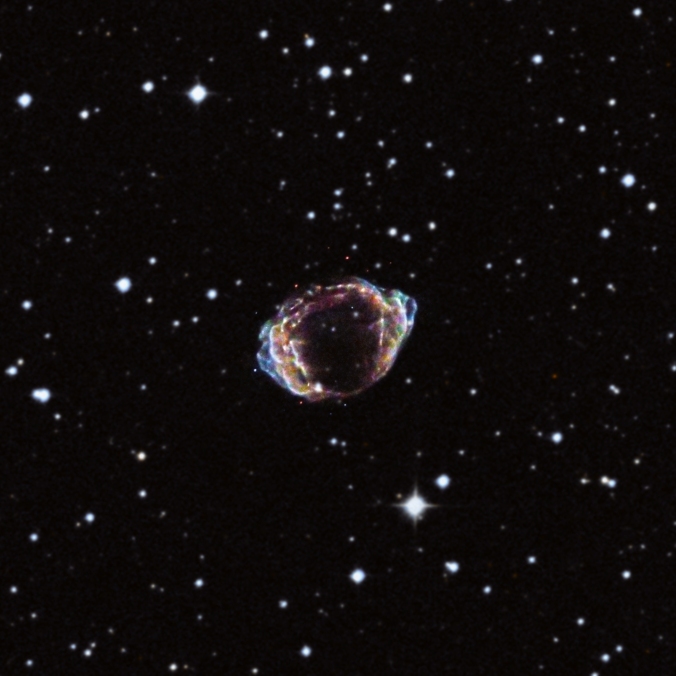 At the centre of the supernova remnant may be what is left following the collapse of the core of the star. Depending upon the mass of the star, this could be a black hole or a neutron star (or it could be nothing). We’re interested in the case it is a neutron star.

Neutron stars are incredibly dense. One teaspoon’s worth would have about as much mass as 300 million elephants. Neutron stars are like giant atomic nuclei. We’re not sure how matter behaves in such extreme conditions as they are impossible to replicate here on Earth.

Since young neutron stars are the best potential sources, this study looked at nine young supernova remnants in the hopes of finding continuous gravitational waves. Searching for gravitational waves from particular sources is less computationally expensive than searching the entire sky. The search included Cassiopeia A, which had been previously searched in LIGO’s fifth science run, and G1.9+0.3, which is only 150 years old, as discovered by Dave Green. The positions of the searched supernova remnants are shown in the map of the Galaxy below. 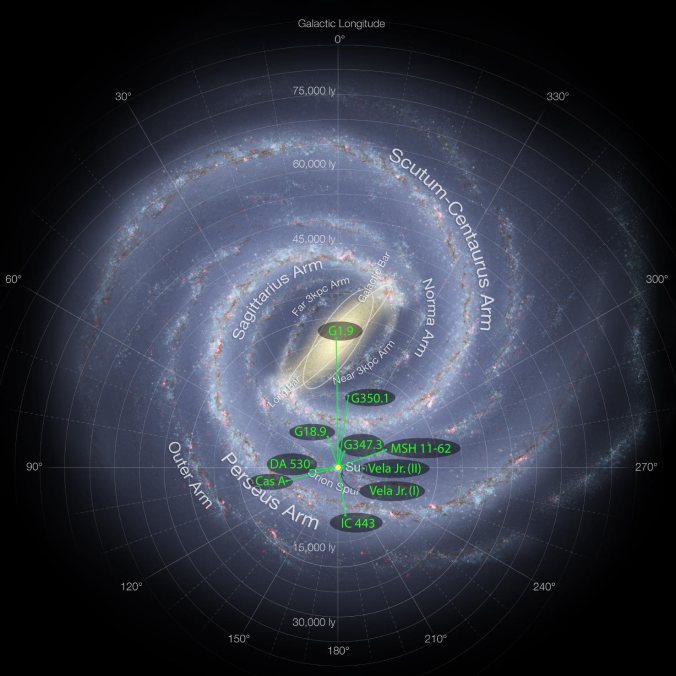 The nine young supernova remnants searched for continuous gravitational waves. The yellow dot marks the position of the Solar System. The green markers show the supernova remnants, which are close to the Galactic plane. Two possible positions for Vela Jr (G266.2−1.2) were used, since we are uncertain of its distance. Original image: NASA/JPL-Caltech/ESO/R. Hurt.

No gravitational waves were found. The search checks how well template waveforms match up with the data. We tested that this works by injecting some fake signals into the data.  Since we didn’t detect anything, we can place upper limits on how loud any gravitational waves could be. These limits were double-checked by injecting some more fake signals at the limit, to see if we could detect them. We quoted 95% upper limits, that is where we expect that if a signal was present we could see it 95% of the time. The results actually have a small safety margin built in, so the injected signals were typically found 96%–97% of the time. In any case, we are fairly sure that there aren’t gravitational waves at or above the upper limits.

These upper limits are starting to tell us interesting things about the size of neutron-star bumps and waves. Hopefully, with data from Advanced LIGO and Advanced Virgo, we’ll actually be able to make a detection. Then we’ll not only be able to say that these bumps and waves are smaller than a particular size, but they are this size. Then we might be able to figure out the recipe for making the stuff of neutron stars (I think it might be more interesting than just flour and water).