Understanding how stars work is a fundamental problem in astrophysics. We can’t open up a star to investigate its inner workings, which makes it difficult to test our models. Over the years, we have developed several ways to sneak a peek into what must be happening inside stars, such as by measuring solar neutrinos, or using asteroseismology to measure how sounds travels through a star. In this paper, we propose a new way to examine the hearts of stars using gravitational waves. 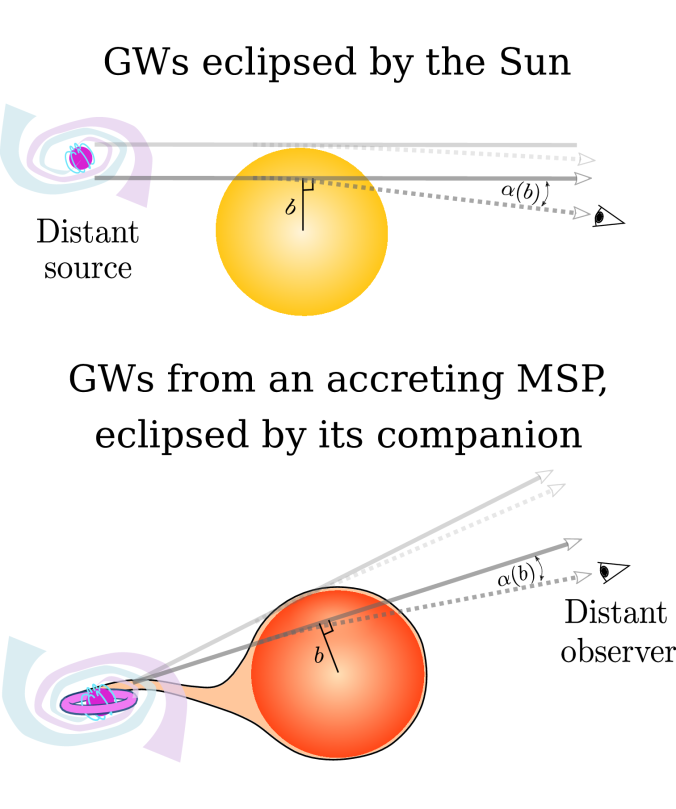 To date, we have only seen gravitational waves from compact binary coalescences (the inspiral and merger of two black holes or neutron stars). These are not a good source for eclipses. The chances that they travel through a star is small (as space is pretty empty) [bonus note]. Furthermore, we might not even be able to work out that this happened. The signal is relatively short, so we can’t compare the signal before and during an eclipse. Another type of gravitational wave signal would be much better: a continuous gravitational wave signal. 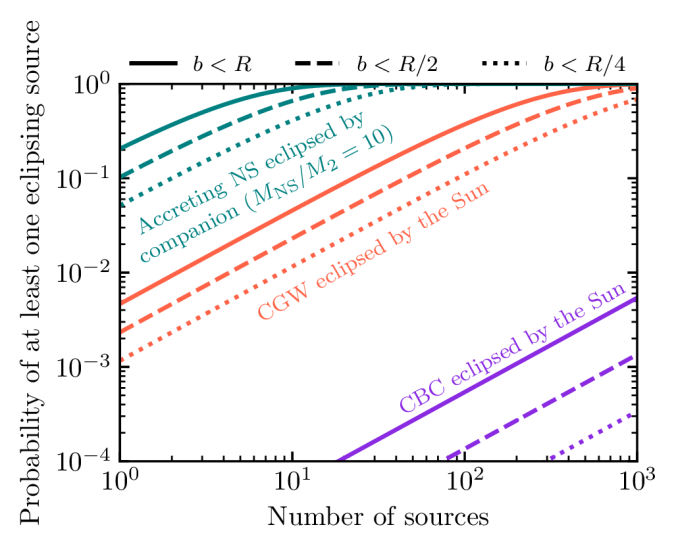 Probability of observing at least one eclipsing source amongst a number of observed sources. Compact binary coalescences (CBCs, shown in purple) are the most rare, continuous gravitational waves (CGWs) eclipsed by the Sun (red) or by a companion (red) are more common. Here we assume companions are stars about a tenth the mass of the neutron star. The number of neutron stars with binary companions is estimated using the COSMIC population synthesis code. Results are shown for eclipses where the gravitational waves get within distance

The effect of the gravitational lensing by a star is small. We performed detailed calculations for our Sun (using MESA), and found that for the effects to be measurable you would need an extremely loud signal. A signal-to-noise ratio would need to be hundreds during the eclipse for measurement precision to be good enough to notice the imprint of lensing. To map out how things changed as the eclipse progressed, you’d need signal-to-noise ratios many times higher than this. As an eclipse by the Sun is only a small fraction of the time, we’re going to need some really loud signals (at least signal-to-noise ratios of 2500) to see these effects. We will need the next generation of gravitational wave detectors.

We are currently thinking about the next generation of gravitational wave detectors [bonus note]. The leading ideas are successors to LIGO and Virgo: detectors which cover a large range of frequencies to detect many different types of source. These will be expensive (billions of dollars, euros or pounds), and need international collaboration to finance. However, I also like the idea of smaller detectors designed to do one thing really well. Potentially these could be financed by a single national lab. I think eclipsing continuous waves are the perfect source for this—instead of needing a detector sensitive over a wide frequency range, we just need to be sensitive over a really narrow range. We will be able to detect continuous waves before we are able to see the impact of eclipses. Therefore, we’ll know exactly what frequency to tune for. We’ll also know exactly when we need to observe. I think it would be really awesome to have a tunable narrowband detector, which could measure the eclipse of one source, and then be tuned for the next one, and the next. By combining many observations, we could really build up a detailed picture of the Sun. I think this would be an exciting experiment—instrumentalists, put your thinking hats on!

arXiv: 1912.04268 [astro-ph.SR]
Journal: Physical Review D; 101(2):024039(15); 2020
Data release: Eclipses of continuous gravitational waves as a probe of stellar structure
CIERA story: Using gravitational waves to see inside stars
Why does the sun really shine? The Sun is a miasma of incandescent plasma

Since signals from compact binary coalescences are so unlikely to be eclipsed by a star, we don’t have to worry that our measurements of the source property are being messed up by this type of gravitational lensing distorting the signal. Which is nice.