It’s now about 7 weeks since the announcement, and the madness is starting to subside. Although, that doesn’t mean things aren’t busy—we’re now enjoying completely new forms of craziness. In mid March we had our LIGO–Virgo Collaboration Meeting. This was part celebration, part talking about finishing our O1 analysis and part thinking ahead to O2, which is shockingly close. It was fun, there was cake.

Celebratory cake from the March LIGO–Virgo Meeting. It was delicious and had a fruity (strawberry?) filling. The image is February 11th’s Astronomy Picture of the Day. There was a second cake without a picture, that was equally delicious, but the queue was shorter.

All the business means that I’ve fallen behind with my posts, and I’ve rather neglected the final paper published the week starting 8 February. This is perhaps rather apt as this paper has the misfortune to be the first non-detection published in the post-detection world. It is also about a neglected class of signals.

We look for several types of signals with LIGO (and hopefully soon Virgo and KAGRA):

We have some effective search pipelines for finding short bursts—signals of about a second or less. Coherent Waveburst, which was the first code to spot GW150914 is perhaps the best known example. This paper looks at finding longer burst signals, a few seconds to a few hundred seconds in length.

There aren’t too many well studied models for these long bursts. Most of the potential sources are related to the collapse of massive stars. There can be a large amount of matter moving around quickly in these situations, which is what you want for gravitational waves.

Massive stars may end their life in a core collapse supernova. Having used up its nuclear fuel, the star no longer has the energy to keep itself fluffy, and its core collapses under its own gravity. The collapse leads to an explosion as material condenses to form a neutron star, blasting off the outer layers of the star. Gravitational waves could be generated by the sloshing of the outer layers as some is shot outwards and some falls back, hitting the surface of the new neutron star. The new neutron star itself will start life puffed up and perhaps rapidly spinning, and can generate gravitational waves at it settles down to a stable state—a similar thing could happen if an older neutron star is disturbed by a glitch (where we think the crust readjusts itself in something like an earthquake, but more cataclysmic), or if a neutron star accretes a large blob of material.

For the most massive stars, the core continues to collapse through being a neutron star to become a black hole. The collapse would just produce a short burst, so it’s not what we’re looking for here. However, once we have a black hole, we might build a disc out of material swirling into the black hole (perhaps remnants of the outer parts of the star, or maybe from a companion star). The disc may be clumpy, perhaps because of eddies or magnetic fields (the usual suspects when astrophysicists don’t know exactly what’s going on), and they rapidly inspiralling blobs could emit a gravitational wave signal.

The potential sources don’t involve as much mass as a compact binary coalescence, so these signals wouldn’t be as loud. Therefore we couldn’t see them quite as far way, but they could give us some insight into these messy processes.

The paper looks at results using old LIGO data from the fifth and sixth science runs (S5 and S6). Virgo was running at this time, but the data wasn’t included as it vastly increases the computational cost while only increasing the search sensitivity by a few percent (although it would have helped with locating a source if there were one). The data is analysed with the Stochastic Transient Analysis Multi-detector Pipeline (STAMP); we’ll be doing a similar thing with O1 data too.

The analysis is cunning, as it coherently analysis data from both detectors together when constructing the spectrogram, folding in the extra distance a gravitational wave must travel between the detectors for a given sky position.

The significance of events is calculated is a similar way to how we search for binary black holes. The pipeline ranks candidates using a detection statistic, a signal-to-noise ratio for the cluster of interesting time–frequency pixels

by analysing time-shifted data: where we’ve shifted the data from one of the detectors in time relative to data from the other so that we know there can’t be the same signal found in both.

is shown below from the search (dots) and from the noise background (lines). You can see that things are entirely consistent with our expectations for just noise. The most significant event has a false alarm probability of 54%, so you’re better off betting it’s just noise. There are no detections here. 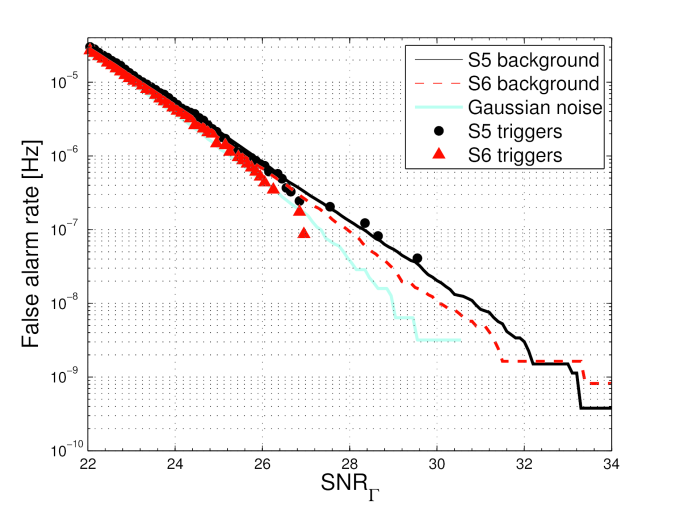 False alarm rate (FAR) distribution of triggers from S5 (black circles) and S6 (red triangles) as a function of the
signal-to-noise ratio. The background S5 and S6 noise distributions are shown by the solid black and dashed red lines respectively. An idealised Gaussian noise background is shown in cyan. There are no triggers significantly above the expected background level. Fig. 5 from Abbott et al. (2016).

Since the detectors are now much more sensitive, perhaps there’s something lurking in our new data. I still think this in unlikely since we can’t see sources from a significant distance, but I guess we’ll have to wait for the results of the analysis.

Sunset over the Grand Canyon. One of the perks of academia is the travel. A group of us from Birmingham went on a small adventure after the LIGO–Virgo Meeting. This is another reason why I’ve not been updating my blog.

I blog about topics relevant to my research and teaching. Posts cover a variety of levels: try browsing by category to find something of interest to you. I am also now on Mastodon.