This year’s Nobel Prize in Physics was awarded to Takaaki Kajita and Arthur McDonald for the discovery of neutrino oscillations. This is some really awesome physics which required some careful experimentation and some interesting new theory; it is also one of the things that got me interested in astrophysics.

Neutrinos are an elusive type of subatomic particle. They are sometimes represented by the Greek letter nu

, and their antiparticle equivalents (antineutrinos) are denoted by

. We’ll not worry about the difference between the two. Neutrinos are rather shy. They are quite happy doing their own thing, and don’t interact much with other particles. They don’t have an electric charge (they are neutral), so they don’t play with the electromagnetic force (and photons), they also don’t do anything with the strong force (and gluons). They only get involved with the weak force (W and Z bosons). As you might expect from the name, the weak force doesn’t do much (it only operates over short distances), so spotting a neutrino is a rare occurrence.

The charming bestiary of subatomic particles made by Particle Zoo.

There is a large family of subatomic particles. The electron is one of the most familiar, being a component of atoms (and hence you, me, cake and even marshmallows). The electron has two cousins: the muon (not to be confused with the moo-on) and the tau particle. All three have similar characteristics, with the only real difference being their mass. Electrons are the lightest, muons are about 207 times heavier, and tau are about 17 times heavier still (3477 times the mass of the electron). Each member of the electron family has a neutrino counterpart: there’s the electron-neutrino

is the Greek letter mu) and the tau-neutrino

is the Greek letter tau).

Every second, around sixty billion neutrinos pass through every square centimetre on the Earth. Since neutrinos so rarely interact, you would never notice them. The source of these neutrinos is the Sun. The Sun is powered by nuclear fusion. Hydrogen is squeezed into helium through a series of nuclear reactions. As well as producing the energy that keeps the Sun going, these create lots of neutrinos. 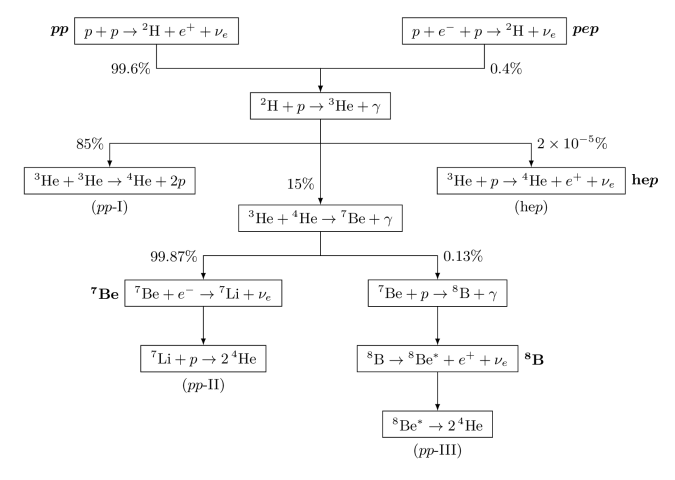 The nuclear reactions that power the Sun. Protons (

), which are the nuclei of hydrogen, are converted to Helium nuclei after a sequence of steps. Electron neutrinos

are produced along the way. This diagram is adapted from Giunti & Kim. The traditional names of the produced neutrinos are given in bold and the branch names are given in parentheses and percentages indicate branching fractions.

The neutrinos produced in the Sun are all electron-neutrinos. Once made in the core of the Sun, they are free to travel the 700,000 km to the surface of the Sun and then out into space (including to us on Earth). Detecting these neutrinos therefore lets you see into the very heart of the Sun!

Solar neutrinos were first detected by the Homestake experiment. This looked for the end results of nuclear reactions caused when an electron-neutrino is absorbed. Basically, it was a giant tub of dry-cleaning fluid. This contains chlorine, which turns to argon when a neutrino is absorbed. The experiment had to count how many atoms of argon where produced. In 1968, the detection was announced. However, we could only say that there were neutrinos around, not that they were coming from the Sun…

To pin down where the neutrinos were coming from required a new experiment. Deep in the Kamioka Mine, Kamiokande looked for interactions between neutrinos and electrons. Very rarely a neutrino will bump into an electron. This can give the electron a big kick (since the neutrino has a lot of momentum). Kamiokande had a large tank of water (and so lots of electrons to hit). If one got a big enough kick, it could travel faster than the speed of light in water (about 2/3 of the speed of light in vacuum). It then emits a flash of light called Cherenkov radiation, which is the equivalent of the sonic boom created when a plane travels faster than the speed of sound. Looking where the light comes from tells you where the electron was coming from and so where the neutrino came from. Tracing things back, it was confirmed that the neutrinos were coming from the Sun!

This discovery confirmed that the Sun was powered by fusion. I find it remarkable that it was only in the late 1980s that we had hard evidence for what was powering the Sun (that’s within my own lifetime). This was a big achievement, and Raymond Davies Jr., the leader of the Homestake experiment, and Masatoshi Koshiba, the leader of the Kamiokande experiment, were awarded the 2002 Nobel Prize in Physics for pioneering neutrino astrophysics. This also led to one of my all-time favourite pictures: the Sun at night.

The Sun at night. Solar neutrinos as detected by Super-Kamioknade looking through the Earth. I think this is the astronomical equivalent of checking if the fridge light does go off when you close the door. Credit: Marcus Chown & Super-Kamiokande.

The mystery of the missing neutrinos

The solar models were recalculated and tweaked, with much work done by John Bahcall and collaborators. More sophisticated calculations were performed, even folding in new data from helioseismology, the study of waves in the Sun, but the difference could not be resolved.

However, there was an idea in particle physics by Bruno Pontecorvo and Vladimir Gribov: that neutrinos could change flavour, a phenomena known as neutrino oscillations. This was actually first suggested before the first Homestake results were announced, perhaps it deserved further attention?

The solar neutrino problem was finally solved in 2001 through measurements of the Sudbury Neutrino Observatory (SNO). SNO is another Cherenkov detector like (Super-)Kamiokande, but it used heavy water instead of regular water. (High-purity heavy water is extremely expensive, it would have cost hundreds of millions of dollars for SNO to buy the 1000 tonnes it used, so it managed to secure it on loan from Atomic Energy of Canada Limited). Using heavy water meant that SNO was sensitive to all flavours of neutrinos. Like previous experiments, SNO found that there were not as many electron-neutrinos from the Sun as expected. However, there were also muon-neutrinos and tau-neutrinos, and when these were added, the total worked out!

The solar astrophysicists had been right all along, what was missing was that neutrinos oscillate between flavours. Studying the Sun had led to a discovery about some of the smallest particles in Nature.

Experiments have shown that neutrino oscillations occur, but how does this work? We need to delve into quantum mechanics.

The theory of neutrino oscillations say that each of the neutrino flavours corresponds to a different combination of neutrino mass states. This is weird, it means that if you were to somehow weight an electron-, muon- or tau-neutrino, you would get one of three values, but which one is random (although on average, each flavour would have a particular mass). By rearranging the mass states into a different combination you can get a different neutrino flavour. While neutrinos are created as a particular flavour, when they travel, the mass states rearrange relative to each other, so when they arrive at their destination, they could have changed flavour (or even changed flavour and then changed back again).

To get a more detailed idea of what’s going on, we’ll imagine the simpler case of there being only two neutrino flavours (and two neutrino mass states). We can picture a neutrino as a clock face with an hour hand and a minute hand. These represent the two mass states. Which neutrino flavour we have depends upon their relative positions. If they point in the same direction, we have one flavour (let’s say mint) and if they point in opposite directions, we have the other (orange). We’ll create a mint neutrino at 12 noon and watch it evolve. The hands more at different speeds, so at ~12:30 pm, they are pointing opposite ways, and our neutrino has oscillated into an orange neutrino. At ~1:05 pm, the hands are aligned again, and we’re back to mint. Which neutrino you have depends when you look. At 3:30 am, you’ll have a roughly even chance of finding either flavour and at 6:01 pm, you’ll be almost certain to have orange neutrino, but there’s still a tiny chance of finding an mint one. As time goes on, the neutrino oscillates back and forth.

With three neutrinos flavours, things are more complicated, but the idea is similar. You can imagine throwing in a second hand and making different flavours based upon the relative positions of all three hands.

We can now explain why Super-Kamiokande saw different numbers of muon-neutrinos from different sides of the Earth. Those coming from above only travel a short distance, there’s little time between when they were created and when they are detected, so there’s not much chance they’ll change flavour. Those coming through the Earth have had enough time to switch flavour.

A similar thing happens as neutrinos travel from the core of the Sun out to the surface. (There’s some interesting extra physics that happens here too. A side effect of there being so much matter at the centre of the Sun, the combination of mass states that makes up the different flavours is different than at the outside. This means that even without the hands on the clock going round, we can get a change in flavour).

For confirming that neutrinos have mass, Takaaki Kajita of Super-Kamiokande and Arthur McDonald of SNO won this year’s Nobel Prize. It is amazing how much physics has been discovered from trying to answer as simple a question as how does the Sun shine?

Even though neutrinos are shy, they are really interesting characters when you get to know them.

Now that the mystery of the missing neutrinos is solved, what is next? Takaaki Kajita is now involved in another project in the Kamioka Mine, the construction of KAGRA, a gravitational-wave detector. 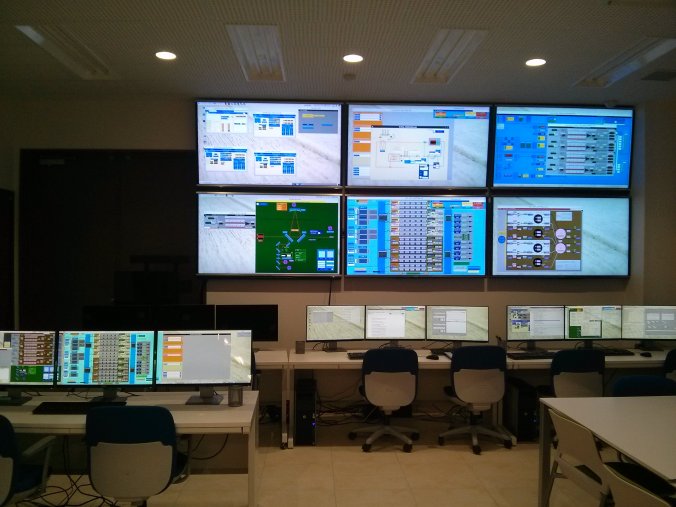 The control room of KAGRA, the gravitational-wave detector in the Hida Mountains, Japan. I visited June 2015. Could a third Nobel come out of the Kamioka Mine?